Lindos. A window in the Aegean Sea

Lindos is the second most famous destination of Rhodes and is located at the southernmost part of the island. The settlement with the white houses and the imposing citadel attracts visitors from all over the world. The Aegean Sea with the divine blue water offers to the city of Lindos a special and rare beauty.

A brief history of Lindos

According to Diodorus Siculus, Lindos was one of the three sons of Kerkafos, the son of Helios and the nymph Rhodes. His other two brothers were Kameiros and Ialyssos. The three brothers have divided the island of Rhodes into three parts and built the three cities of Lindos, Kameiros and Ialyssos. Besides mythology, Lindos had already been inhabited since the Neolithic era. The first organized settlement was built in the 11th century BC from the Dorians.

Lindos, along with five other cities (Kameiros, Ialyssos, Kos, Knidos and Halicarnassus in Asia Minor) formed a confederation of six cities, the Doric Hexapolis and worshiped the Triopian Apollo in a holy site near Knidos. In the following years, the city actively participated in the establishment of colonies throughout the Mediterranean Sea. The most famous were Phaselis in Asia Minor, Gela in the island of Sicily and Rhodes in the Iberia peninsula.

The city experienced great prosperity in the 6th century BC during the tyranny of Cleobulus, one of the Seven Sages of Greece, who ruled Lindos for 40 years. Under his rule, the Doric temple of Athena Lindia was built on the citadel. After the end of the Persian Wars, Lindos participated in the Delian League. However, during the Peloponnesian War, the three cities of the island took the side of the Spartans.

The people of Lindos have been pioneers of shipping. They established many colonies around the Mediterranean Sea and dominated the trade since 7th century BC. The first collection of maritime laws, known as the “Rhodian Sea Law”, was drafted in Lindos. The provisions of this law became the basis of the international maritime legislation.

The Acropolis of Lindos

The citadel of Lindos rises above the settlement at a height of 116 meters. Athena Lindia was worshiped there. According to legend, the sanctuary was built by Danaus, who arrived in Lindos with his daughters from Egypt. The temple of Athena Lindia was destroyed by fire in the 4th century BC. The new temple, that was built after the fire, is the temple, that visitors see today.

During the Byzantine period, Christian churches were built on the ruins of the old temples. The church of St. John was built in the 13th or 14th century AD. The Knights Hospitaller improved and strengthened the byzantine fortifications. The Ottoman Turks, who succeeded them, built bastions and maintained a permanent guard.

Next to Lindos is St. Paul’s bay. An amazing place with crystal and enchanting water. According to tradition, Paul the Apostle landed here during his tour in Greece. The bay is surrounded by rocks and only a small gap facilitates the entrance and exit of the boats. Between the rocks there are two sandy spots, which serve the swimming needs of the tourists in the area. The rocks are suitable for fishing and diving.

The photos have been taken by me in July 2014

Andros. The island of the nobles

Rhodes. In the footsteps of the knights 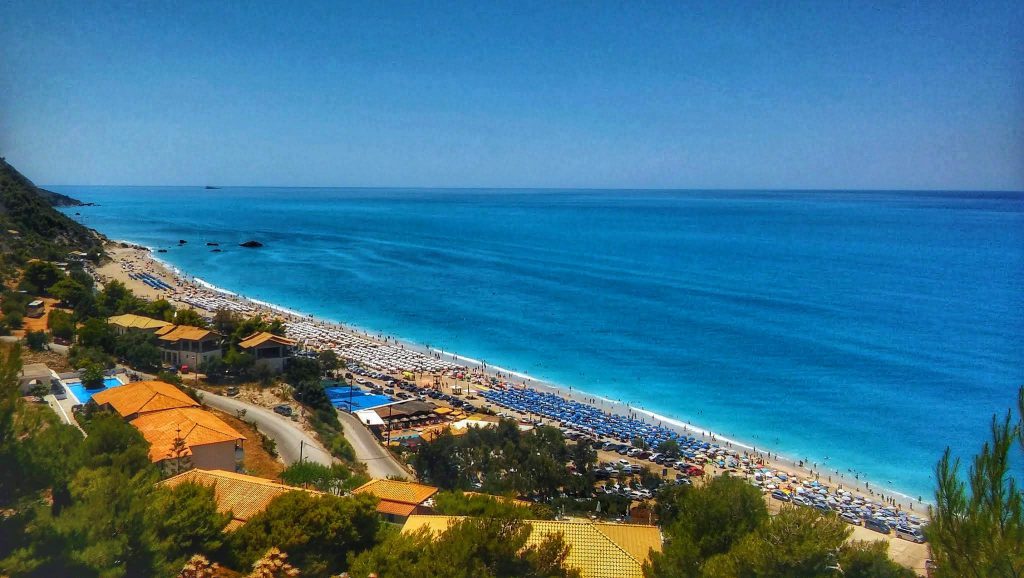 Lefkada. The fairy of the Ionian Sea